Since its creation in December 1996 a key objective of the Pacific Public Health Surveillance Network (PPHSN) has been to connect health professionals to facilitate timely sharing of information about health threats in the region.

This dream became reality when, in mid-April 1997, an email (and fax) list server became operational at the Community Health Programme of the Pacific Community (SPC). This was the birth of PacNet, a simple but robust alert and communication network. Thanks to PacNet, Information on epidemic-prone diseases or emerging public health threats, such as dengue fever, measles, COVID-19 and recently monkeypox, occurring in or threatening the Pacific can now be widely disseminated in real-time.

Twenty-five years after its creation it is still serving its purpose. This e-mail-based network is continually evolving to take advantage of the advances in information and communication technology. The number of PacNet subscribers, i.e. health professionals from the Pacific region and beyond, has steadily increased from 70 in April 1997 to over 1,200 subscribers today. 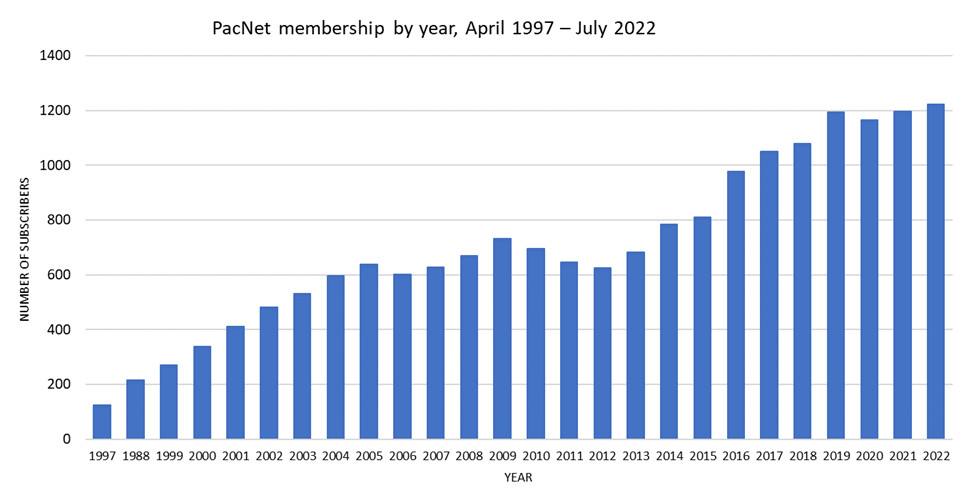 “PacNet, the first service of PPHSN primarily meant to serve for epidemic alert and communication is among the successes of the Pacific Public Health Surveillance Network” SPC’s Senior Epidemiologist Dr Sala Saketa said.

Alfred Dofai, Head of Medical Laboratory, Ministry of Health and Medical Services in the Solomon Islands said “PPHSN is very valuable to us, as this is where we get access to information on diseases that are happening in the region. It enables us to prepare and make ourselves ready to tackle any sort of diseases that might cause outbreak.”

Designed as an early warning system, more than 16,000 alerts, reports and advices have been shared through PacNet since it came online.

“In 2012, we had a dengue outbreak in Niue, and through the information shared via the network, we received a lot of advice, help and resources. It helped us learn how to control the outbreak and to provide information to the public”, explained Alicia Hipa, Public Health and Health Information Officer, Ministry of Health of Niue. “We also used a lot PacNet for our sport teams going overseas”, she added.

PacNet’s value has been demonstrated on many occasions over its 25 years of existence. This includes during mass gatherings such as the 10th Pacific Mini Games in Vanuatu in 2017, where public health officials across the region were briefed daily on the health surveillance status through reports showing trends of syndromes and infectious diseases reported during the event.

Travel medicine is another area that benefits from PacNet. Dr Sylvie Laumont, Acting Public Health Manager at the Department of Health and Social Affairs in New Caledonia explained that they regularly use the alerts and information posted on PacNet when they provide advice to travelers, “For example, the recent malaria alert in Vanuatu (in July 2022) allowed us to react immediately, to make recommendations for travelers and also to raise awareness of doctors on this alert.”

The COVID-19 pandemic has generated a lot of alerts and communications on PacNet, even before the declaration of the pandemic in March 2020. Weekly situation reports and maps on the COVID-19 situation and other epidemic and emerging diseases occurring in or threating the region are produced by SPC’S Public Health Division. These have been disseminated to all Pacific public health surveillance focal points through PacNet in English and French since early 2020. PICTs and other PPHSN members, such as the World Health Organisation (WHO), regularly share reports and informationn through PacNet, such as the Pacific Syndromic Surveillance System weekly bulletin and country situation reports.

The traffic of information shared on PacNet has increased considerably over the past decade and PPHSN members are now exploring new communication technologies to modernise PacNet and further highlight critical information for action.

PPHSN was created 25 years ago (in December 1996) under the joint auspices of the Pacific Community (SPC) and the World Health Organization (WHO) in close consultation with the 22 PICTs and several regional partners.

Its primal focus is communicable diseases, especially those prone to outbreak, such as denge fever or COVID-19.

PPHSN includes the following six key services to support Pacific Island countries and territories with the surveillance and response to outbreaks:

Did you know? PacNet has its own symbol. It represents a conch shell, which is a means of communication in Pacific communities, surrounded by a golden pattern representing the Pacific Island countries and territories, and with the “@” as international e-mail symbol.