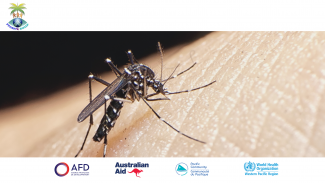 The Pacific Community (SPC) and the World Health Organization (WHO) launched a manual for surveillance and control of Aedes mosquitoes’ vectors in the Pacific during a virtual meeting today.

Mosquitoes of the Aedes genus can transmit viruses that cause dengue, Zika and chikungunya disease. Three diseases that have taken their toll in the Pacific region in recent years, with 95 outbreaks (68 dengue outbreaks, 12 Zika virus and 15 Chikungunya) reported between January 2012 and 13 May 2021.

Lekon Tagavi in Vanuatu says that this manual is important for Vanuatu and the Pacific region as there has not been any specific guidance on how to address Aedes-borne diseases. She adds, “We are glad to have this guidance from SPC and WHO to help us adapt the strategies for Aedes control.”

Dr Salanieta Saketa, SPC’s Senior Epidemiologist while presenting the manual stated “Currently there are no entomological surveillance systems targeting Aedes vectors in many Pacific Island countries and territories (PICTs) except for New Caledonia, French Polynesia and Fiji. This manual will guide PICTs to prevent and control Aedes- borne diseases”.

Dr Tessa Knox WHO’s Pacific Focal Point on Vector Surveillance and Control based in Vanuatu said, “We hope this Manual provides practical guidance for countries and territories of the Pacific region to develop actionable strategies in line with the Global Vector Control Response 2017-2030 and ensuring World Health Assembly resolutions, to prevent and contain Aedes-borne disease outbreaks - now and in the future.”

The manual was developed by SPC and WHO, in consultation with several countries and partners of the Pacific Public Health Surveillance Network (PPHSN), with the goal of strengthening vector surveillance and control capacities and capabilities across the Pacific region.

The development and production of this manual were supported by funding from the Agence française de développement (AFD) to SPC on “Strengthening the capacities of the PPHSN” and the Australian Department of Foreign Affairs and Trade (DFAT).

The English version of the manual can be accessed online and a French version will be available soon.

About PPHSN:
The Pacific Public Health Surveillance Network (PPHSN) is a voluntary network of countries and organisations dedicated to the promotion of public health surveillance and appropriate response to the health challenges of 22 Pacific Island countries and territories (PICTs).

PPHSN was created 24 years ago in December 1996 under the joint auspices of the Pacific Community (SPC) and the World Health Organization (WHO) in close consultation with the 22 PICTs and several regional and international partners.

Its primary focus is communicable diseases, especially those prone to outbreaks, such as dengue fever.

Over the past two decades, PPHSN has done a lot of work to reduce the risks and protect Pacific populations from outbreak-prone diseases. The network includes six key services to support Pacific Island countries and territories with the surveillance and response to outbreaks: